A while back, before things really got bad in the Sahara (see map right) it occurred to me that, with one small effort I could link up a lateral crossing of the Sahara between the Nile and Atlantic. Of course it would have taken me several years, but across three trips: Libya 1998 (researching Sahara Overland); Egypt 2004 and SEQ 2006 it looks like I’ve covered about 90% of the distance.

All that remained was a short, 70-km gap in the far eastern Algerian oilfields near In Amenas to the Algerian Tree (visible on Google sat and pictured below in 1998) on Route L2 from Sahara Overland (right). Some may recall Micheal Palin visited this very tree for his Sahara TV show and proclaimed ‘this spare, uncluttered, beautiful spot was one of my favourite places in the Sahara‘. Well, he’s easy to please!

And in fact, when we treked with mules to Sefar on the Tassili plateau in 2013, I was even closer to our 1998 route into the Libyan Akakus. On the right, Wadi Tin Alkoum demarking the Libyan-Algerian border, south of Ghat.

When the Sahara was more accessible West to East used to capture the imagination of adventure seekers, and although such a transit isn’t what it’s about to me, I wrote a box for the book (at the) about the four best-known vehicular transits which broadly speaking, set out with this goal in mind: 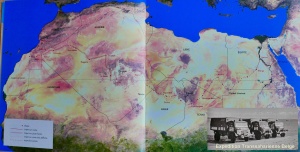 As I suggested there, a true, unbroken, all-desert lateral crossing of the Sahara with vehicles had yet to be achieved and as things stand, probably never will be in our time. If you combined the British route across Mauritania and Mali, then follow the French or Germans to Dirkou in Niger and the French or Belgians east of there, you have a pretty good line. As it is, even with a lot of road-driving in Algeria, I’d say from Tan Tan 9000km east to Port Safaga near Hurghada on the Red Sea, the Belgies get the nod (map left but note the oddly misaligned borders).

Land Cruiser in the Libyan Akakus

The chances of achieving a true Saharan traverse are currently about as slim as they’ve ever been since the invention of desert driving. Much of the Sahara of Mali, Algeria, Libya, Niger and Egypt are unsafe or off-limits. Eastern Mauritania is said to be the same, and southern Algeria from Bordj towards Djanet (as we did in 2006 – left) is restricted.

VW Taro in the dunes of the Majabat al Koubra – and just hours away from total engine failure ;-(

Northern Chad always presented difficulties from the mountainous terrain, let alone permissions as well as security issues now that the brakes are off in southern Libya. Meanwhile,
people smuggling convoys still roll into Libya from northern Sudan above Darfur and are preyed on by Zaghawa bandits. In southern Egypt the Gilf has so many access regulations that few bother any more. Even in the West-East expedition era permissions played a part: the Belgians had to enter Algeria from Spanish Sahara, not Morocco, the Joint Services couldn’t enter Algeria which kiboshed their route, the Hanomagers bounced around the Sahara like pinballs and the French seemed to dodge Algeria and Chad.

A few years ago when ‘snow‘ was falling over the southern Sahara, it was reported that cocaine was landing in narco-state Guinea Bissau to be transported up to Mauritania from where smugglers lit off east in their V8, twin-turbo Land Cruisers right across the Sahara

to Egypt (left). Bribing or intimidating their way across the desert in just a few days, on their way they doubtless passed close to the 1977 Saviem Balise #22 east of the Gilf (right). At the Suez ports the coke was said to get stashed aboard a container bound for southern Europe. So these days the ultimate Sahara expedition may well be being knocked out, but not by the sort of people too bothered about getting into the Guinness Book of Records or Facebooking about it with live Spot tracking.

Up until the gas plant attack at Tigantourine in January 2013, I could probably have knocked out my crossing to the Algeria Tree at any time. Either driving down to Edjeleh oil camp right on the Libyan border (map right), then scooting over the dunes as shown on Google Earth (Sahara Overland Route L2’s Algerian stage). A few years ago I recall making contact

with an oil worker based in Edjejeh, asking him about civilian access in the area but he wasn’t very forthcoming. Alternatively, one could just nail it 100km east from the N3 highway south of Erg Bouharet. The stony reg thereabouts is criss-crossed with old oil exploration tracks, but as I say, post-Tigantourine that area will now be very closely watched.

Then there’s the more substantial missing section from my West-East in eastern Libya: from Waw Namus crater which we visited in 1998 (right) to a place east of Kufra where we spent Christmas in 2004 on our Gilf trip based out of Egypt.

I remember that day well; we had more trouble than normal getting Mahmoud’s Toyota-engined Series III running, dragging it to life with the Land Cruiser (right) after setting a fire under the chilled engine. With us that time was Toby Savage (my Desert Driving dvd co-presenter) who in 2012 travelled through the Gilf with WWII-era Jeeps, while possibly outnumbered by escorts and soldiers.

Unimog in Faya, 1965. Below right: arriving in Tangiers

No tourist has driven in southern Libya since the fall of Gaddafi in 2011.  The south has now controlled by the Tuareg (and maybe a bit of AQIM) and the Tubu who battle it out for the control of the lucrative people-trafficking routes and other commodities coming up from Niger. As things stand now in Libya, ticking off that final 1000-km stage from Waw crater to Xmas Camp may take a while – something to save for a rainy day in the Sahara. 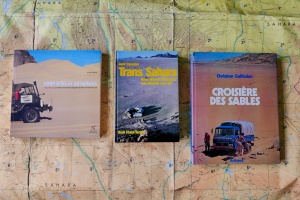 Of the four expeditions mentioned here, the three continental ones produced illustrated books in French and German. If you don’t read either

language, the big-format Croisiere des Sables is a good one to get – mostly pictures and under a tenner on abebooks.

Even though Tom Sheppard publishes his own Sahara picture books, it looks like we’ll never get a full account of the JSE 101 crossing, although he wrote a pretty good illustrated summary in the winter 2016 issue of the quarterly Overland Journal (right).