Like most people, I am shocked by the brutal murders of the two Scandinavian women camping in the High Atlas this week. Sadly it is another attack being attributed to young men seeking to show solidarity with violent Islamist causes.
One assumes the two women were stalked by the perpetrators from Marrakech, and so the attack might as well have happened anywhere once an opportunity presented itself.
Morocco has been largely free of the types of the attacks which have become commonplace in western Europe in recent years, and yet tourists who’ve long been targets elsewhere in North Africa and the Sahara, are thick on the ground in all the usual places because they feel safe. The last reported terrorist attacks were a bomb targeting tourists in Marrakech in April 2011 and a bigger wave of bombings in Casablanca way back in 2003, mostly aimed at Jewish interests. Unlike the rest of the Sahara, to date no tourist has ever been kidnapped in Morocco. 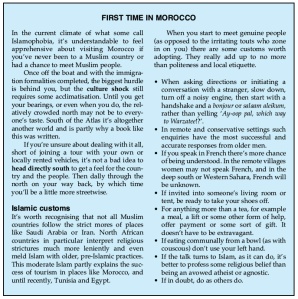 How to be safe in Morocco
As a tourist, maintaining your safety in Moroccan cities is no different to any other unfamiliar place. Hustlers are common in certain areas; traffic appears chaotic and driving erratic; pickpockets exist, cheap hotels may feel insecure and mountain roads are not velvet-smooth Alpine super highways. All these have long been far greater threats to visitors in Morocco than Islamist violence.
Being a Muslim country does give Morocco an edge to those unfamiliar with Islamic culture, particularly women, but the Islam practised here is a lot milder than that found in Saudi or Iran. Read the blue box, left, extracted from by Morocco guidebook published in 2017. Also read the sensible guidelines given on the British FCO website, to give one example. They spell out all how to avoid or be aware of the most common risks.

In a crime sense, the popular hiking area below Mt Toubkal (right) where the women were murdered is not dangerous compared to a big Moroccan city. It is probably its popularity and proximity to Marrakech which made it an easy, adventurous destination.
Occasional unnerving but actually harmless encounters over the years have long led me to advise the following: when wild camping, do so unseen and completely out of sight if possible, and if not then camp close to or in a settlement. This way either everyone knows you’re there or no one does. I give similar advice in both my global overlanding books and act like this anywhere in the world, just for peace of mind.
In Morocco many have found undisturbed wild camping can be quite hard to achieve. Even in the desert, travellers commonly report someone popping up out of nowhere, usually a curious nomad or villager, or sometimes police checking up on you. It should be understood that in North Africa and the Sahara, camping alone in the middle of nowhere away from other people is regarded by locals as suspicious or odd. 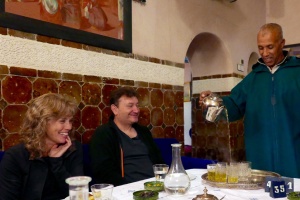 For us Euro-tourists camping has long been regarded as a money-saving adventure, but because hotels and auberges can be so numerous and inexpensive in southern Morocco (from <€10), I’ve long preferred the comfort and security they offer to all the clobber and faffing required with camping, especially if not travelling in a spacious car, or when travelling in the cool season when mountain nights get chilly and drag on for 12 hours. In a cozy auberge you get to meet local people or fellow travellers, eat well, rest properly and recharge your gadgets.

Another practise desert travellers like me have adopted since the deep Sahara became FUBAR’d, is not to share detailed travel plans with strangers or online, especially on publicly readable social media. I don’t do Facebook or Whatsapp, but by all means keep friends and family in a closed group appraised of your movements. In Morocco the reach of the mobile network is far greater than you’d expect, not least in remote rural areas where locals depends on it. A local SIM card costs from €2 which includes €2 of credit. You may need the vendor’s help in setting it up.

No one could have anticipated the appalling murders in the High Atlas any more than crossing a bridge in London, backpacking in New Zealand, visiting a market in Strasburg, attending a Baltic island retreat or a school or place of worship in the US. Morocco remains one of the few countries in North Africa where tourism continues to thrive despite anxieties about ‘Muslim countries’. It helps sustain the local economy, particularly in rural areas where the true level of poverty is much greater than it looks. Don’t let this tragic event unsettle your plans to visit a wonderful country, any more than any of the other places listed above.