You’d think I’d have learned something from my 1982 ride on the XT5. Well I did: despite it all I liked the Sahara. When it was good it was epic and other worldly, and if you come from one of the less edgy suburbs of South London, the Sahara made quite an impact – nature stripped back to the raw bones of sand and rock. And though it all lay a frail ribbon of road called they called the trans-Sahara Highway. 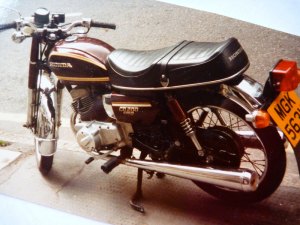 By 1984 I’d settled for an easy way of despatching for a living: working long but steady hours for a typesetter collecting copy and delivering artwork on the short run between Holborn and the West End. There was no need to run an IT250 or a 900SS should you get sent to the other side of the country on a wet Friday evening. For this job a dreary commuter bike was all that was needed. And none came drearier than Honda’s CD200 Benly twin (right), a single-carbed commuter bike ridden by stoical Benlymen who valued mind-numbing reliability above mind expanding activities.

Riding on and off up to 12 hours a day on a hyper-dull bike can drive you a bit crazy at 24 years of age. Then I acquired an AJS 370 Stormer (left) a vile, shin-kicking British two-stroke motocrosser that was the polar extreme of the Bender. In a moment of intuitive brilliance which years ago had given birth to the Triton cafe racer, I figured I could marry the two and make something more rideable but less boring: a Benly-engined, MX-framed desert racer!

In the summer of ’84 the machine took shape in my artfully appointed bike design studio in London’s literary Bloomsbury district (left). It took two goes to get a bike shop to correct the engine alignment mistakes of the former, but here it was, suspensed by some Honda XL250s rear shocks as long as a truncheon, and silenced by a pair of VW Beetle tail pipes, a trick some of you may recognise from the BM I rode with in Algeria in ’82.

Later on, the job was finished off with gearing more suited to horizontal applications and an RD250 tank with a sexy ‘Moto Verte’ sticker so there’d be no mistaking what an international, Franchophilious guy I was. I took it out to the woods near Addington to see what it could do. 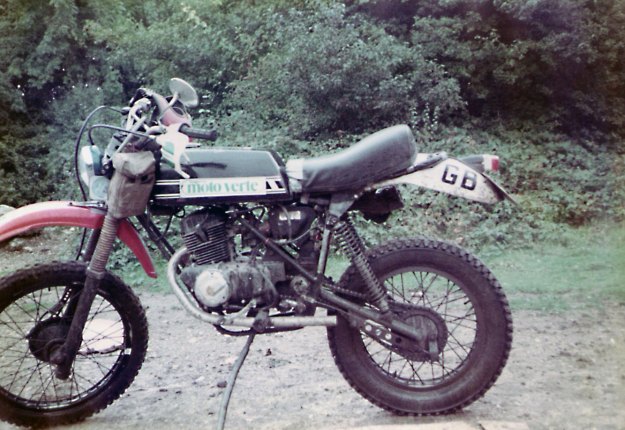 The answer was not much more than dragging a dead dog around on a lead. The VW pipes managed to reduce the power at the rear wheel to quite possibly single figures while the AJ’s conical hub brakes where a stipulation made by the then powerful Ambulance Drivers’ Union in the early 1970s to ensure that their members were never without work scraping Stormer riders off the sides of buildings which had got in the way of the engine’s epileptic, all-or-nothing power delivery.

I dubbed the bike a ‘Bénélé’ in envious recognition of Yamaha’s near-perfect XT600Z Ténéré which had been out for a couple of years and which was itself based on Yamaha’s Dakar Rally desert racers.

So what do you do with a dummy desert racer? You ride it to the Sahara of course, in a little less time than is available. You pack a 3500-mile trip to North Africa into two-weeks and you schedule it for September when you imagine the peak summer temperatures are on the wane. This time there’d be no fear of enduring the cold of a mid-winter European transit or indeed the northern Sahara. And my goal – the mysterious massif (above left) which I’d passed by, south of Arak on my way to Tam in 1982.

The Bénélé’s top speed was no more than 50mph – and even at that speed it felt rather unsafe, should a squirrel run out in front of me – so to get a good run up I rode straight from work on a Friday night down to a mate’s in Canterbury, close to the port of Dover. By maintaining momentum, Monday night found me camped back among the magical outcrops of Cassis, near Marseille, ready to hop on the ferry to Algiers next morning.

You can maybe see that I had an all-new soft luggage set up this time. No more sawn-off chemical tins on Dexion racking. Oh no – this time I had a small canvas pannier on one side, a thin cotton Times newspaper delivery bag on the other – I must have found in a bin somewhere – an over-huge tank bag that sat

well on the flat-topped RD tank and a sleeping bag in front of the headlight to keep the bugs off the lens. Cunningly, I also had a tool bag with other heavy items strapped under the lofty engine. If my mass had been any more centralised I’d have become a Black Hole right there and then.

My first memory of Algeria that year was being a little unnerved that as far north as El Golea it was already 35°C by 9am. If you live in Yuma that’s probably no big deal in September, but for a South London boy it was a bit of a shock. I filled up in El G and set off across the sinister Tademait which had spooked me on my first transit in ’82. I buzzed along at 12hp/hour and by early afternoon dust devils or mini whirlwinds were whipping across the baking gibber to either side. I recalled how a mate told me he’d been knocked off his XS650 by one in Turkey that year. I was already tired, thirsty, sore and hot when up ahead what looked like a huge wall of sand hundreds of feet high span across the blacktop. Only as I neared it did I realise it was the mother of all whirlwinds, a huge cauldron of rotating sand. I turned the wick up as much as I dared and the motor droned as I punched the Benele into the sand wall. Inside, all visibility was lost as grains pelted me from all directions and I struggled to keep upright. And then in the windless core of the maelstrom the grains turned into pelting rain drops. WTF was going on here!? Search me but before I knew it I’d blasted out of the tornado’s far wall, shoved this time in the opposite direction onto the roadside gravel. Now I knew how those roadsigns got flattened into the dirt…

Yet again the Tademait had terrorised me and I vowed I’d ride into the dark to be off the plateau before stopping. I rode into the dusk, pulled up briefly with the engine running to remove the bag off the headlight, and pushed on to the switchback descent off the Tademait to the desert floor.

That night I stripped off and lay in the dirt by the bike, listening to what sounded like the oil boiling in the crankcases, hours after switching off.

I wasn’t hungry but I drank and drank and soon fell asleep where I lay. Tomorrow I was heading past In Salah, the hottest town in Algeria, deeper into the Sahara.

The first three chapters in Desert Travels cover this trip:

The pictures with commentary are on advrider right here.

In Desert Travels this trip is covered in chapters:

I was learning, or so you’d hope. A great bike, not much luggage and a flexible attitude.
But still the djenoun [malicious desert spirits] gave it their best shot…

I’ll do a commentary on these photos shortly.

Most of Desert Travels is about my disastrous Sahara Motorcycle Tour of 1988: chapters 4-15 out of 25. Five left, only one came back riding…