Part of the Sahara A to Z series 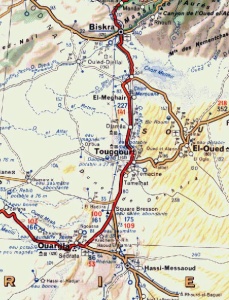 “We left Biskra with Corporal Dewoitine as a mechanic, and took hours to reach Touggourt, averaging 50kph, despite a trail of frightful ruts. Our arrival was all the more sensational than in an airplane because I drove right down the main street in a torrent of dust, skimming past walls and passers-by with with my propeller, causing burnous, guenours and chèches to fly in all directions. It was a beautiful panic!

The two adventurers quickly left Touggourt in a cloud of dust, heading for Ouargla, but the infernal locust began to show its first signs of fatigue: sand gnawed the leading edge of the propeller and the engine dropped to half power. De La Fargue ordered Dewoitine to head for Square Bresson, a junction and small oasis 50km away.”

Just before WWI, at the motor era matured on land sea and air, various self-propelled contraptions came to be tested as a means of penetrating France’s vast Saharan territory. Lacking the railways which by then traversed America and southern Asia, up to that time columns of men had to trudge alongside huge camel caravans, making them vulnerable to still hostile desert tribes.

An ingenious combination of airplane landing gear with a cab stuck on top, the distinctive propeller car was one short-lived solution to enable rapid communication across the desert. Invented by Corporal Gustave Cros, the chassis was an elongated triangle on three axles, each carrying twin wheels, while a propeller directly fixed to a 50-hp motor thrust the vehicle forward. It’s said an ingenious form of highly articulated independent suspension allowed each of the wheels to track the terrain, however rough.

This curious but surely deafening machine proceeded in a series of jumps which supposedly allowed it to cross large sand dunes, hence the name Sauterelle or ‘grasshopper’. You’d hope seat belts were mandatory, less an unexpected lurch while climbing a steep dune launched you backwards…

Early models, like the one right, were considered too light to be stable but nevertheless progressed from two to four to six blades. Capable of 60kph, in the summer of 1914 the Sauterelle left the rail terminus at Biskra for a 200-km test run to Touggourt. The main difficulty was said to be slowing down and stopping, but that didn’t stop a chap called De La Fargue modifying a 60-hp Brasier car; his six-bladed ‘Aerosable’ hopped its way to Touggourt in just two hours. Encouraged by this achievement, he went on to consider an amphibious vehicle whose wheels could be replaced by a wooden hull for sliding over the salty Saharan chotts where even camels feared to tread.

You do wonder what they were thinking. Presumably it was a solution to the problem of powered axles digging in to soft terrain. Perhaps pneumatic tyres were crude and couldn’t reliably be run at low pressures to  elongate the footprint and so increase flotation, or that idea was not yet known (in Libyan Sands Ralph Bagnold wrote of discovering this technique in the 1920s). Hence, doubled wheels all round, like the Renault (above left), or the Citroen half-track desert taxis (right) which were also used on epic trans-continental proving expeditions, long after the Sauterelle had hopped itself  into the scrapheap of automotive dead-ends.

By the end of the 1920s, this period of wacky inventions had run its course while several esteemed French Saharans died in lonely desert plane crashes, But from as early as 1916, on the other side of the Sahara, the British Light Car Patrols were successfully deploying conventional but stripped-down Model T Fords  deep across the Libyan Desert, and all without trailing a deafening sandstorm wherever they went.

Translated and adapted from this post by Oliver Boul where you’ll find lots more interesting stuff.