Riding a bike in the desert is almost the most fun a person can have, so when I saw an advert in TBM for a three week trip to the Algerian Sahara, I jumped at the chance. The trip offered a rare opportunity to travel with legendary desert rider Chris Scott, author of ‘Adventure Motorcycle Handbook’ and ‘Sahara Overland’. Chris is a well known figure in the Sahara (which became clear when he was mobbed by a group of adoring fans during the trip, at a roadside café in Arak). He isn’t a professional tour operator, but he does occasionally take groups out into the desert to help fund his own adventures. Chris is a very easy going character who doesn’t take himself or anything else too seriously. 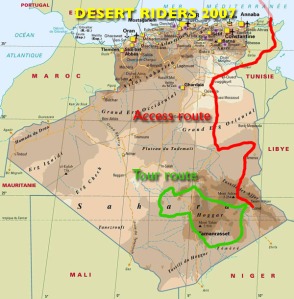 The route chosen by Chris took us in a 2600km anticlockwise loop, heading west from a pretty oasis town of Djanet in the south of Algeria, and stopping halfway at Tamanrasset to visit the Assekrem (a hermitage in the Hoggar mountains), before looping back east to Djanet (click map right). Chris’s unique experience and knowledge enabled us to explore remote and normally inaccessible regions, riding largely off-piste in the most beautiful desert I have ever seen.  Apart from Djanet and Tamanrasset we spent all of our nights camping out in the desert under the stars. 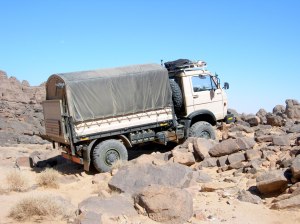 During the trip, Chris drove the MAN support lorry which carried all our food, water and fuel, and occasionally, the odd broken bike. Experienced desert rider Jon Escombe was the pace bike rider, and, since it has been obligatory in Algeria to have a local escort after the tourist kidnappings there in 2003, we were also accompanied by two entertaining local guides in a 4WD Toyota Land Cruiser. 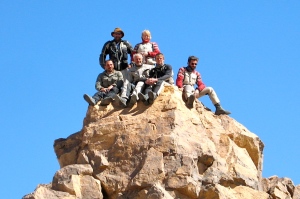 The seven riders on the trip were a very experienced group, most having previously ridden enduros or desert rallies, and all had travelled a fair bit. Oddly enough, out of seven riders – five were TRF members: Mike (who is now TBM’s ‘Mud Life Crisis’ columnist), Nick and Gerald from Cornwall, and Dave and myself from Surrey. Sean from Surrey and Ken from Scotland completed the group.

Preparation
I had decided to splash out on a KTM 450EXC for this trip, as the horrors of kick-starting my recalcitrant XR250R in the desert didn’t appeal. Chris Hockey, aka Dr Shox, did a great job of lowering the KTM (as I’m just 5’6”) and set it up for my weight and the type of riding I do. (Chris sorted out my shocks and forks by POST!).

I fitted a beautiful Scott steering damper to calm the legendary KTM speed wobble, and this also had the beneficial side-effect of raising the bars to a much better position. I also fitted Michelin Desert tyres, a KTM cooling fan (essential) and a 13l Clarke fuel tank. 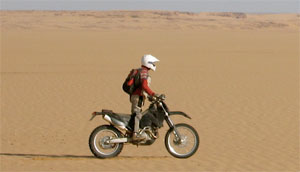 The KTM turned out to be a great choice for the desert – its light weight, electric start, fantastic suspension and responsive ‘point and squirt’ power characteristics made riding a joy. The steering damper took the big impacts, and kept the bike on line with much less effort on my part, greatly reducing fatigue. The combination of Excel rims, heavy duty spokes and stiff Desert tyres meant that I didn’t have to worry too much about punctures or dented rims when riding at speed over the more rugged terrain, although the Deserts might sometimes have been a little too stiff for the light bike to gain enough traction in the really soft sand.

The KTM ran well on the local Algerian fuel (89 octane), and the need for bike maintenance was minimal. A daily check of oil and water, chain tension, nuts and bolts and spoke tension, plus a single air filter skin change and engine oil change was all that was needed. The chain didn’t need any adjustment. The bike didn’t use any oil, and the water needed topping up only once when the radiator boiled over (after the cooling fan became accidentally disconnected during a slight tumble.) Odd spokes and the one or two nuts which I had missed with the Loctite came loose due to the heavy pounding the bike took.

Dave’s XR400 probably had the best size, power and handling characteristics for this type of ride, but all bikes performed well, although Mike’s XR250 was nailed the whole way as his KTM 525EXC hadn’t been ready in time for the trip. Gerald’s four year old KTM 450EXC was the only bike to have any mechanical problems, although this might have been due to lack of cooling fan. The bike overheated and ran completely dry, resulting in its ultimate demise, and the end of the trip for Gerald at Tamanrasset.

Routine
During the trip, the days and nights quickly settled into a routine. Each morning, we were woken in our tents by the distant burble of the volcano kettle, signalling the imminent possibility of hot tea and breakfast.  I would then emerge from my layers of sleeping bag, bag liner, thermal clothing, rustling emergency space blanket and bike jacket. Yes, the nights were a bit cold!

After breakfast, we would pack up and ride out with Jon, meeting up with Chris and the truck at agreed waypoints for lunch and the evening camp. In the evening, Chris cooked the dinner while we rested and munched on snacks. After dinner, we would sit around the camp fire to chat and watch the stars.

Catering for nine people is a challenge in the desert. There are no shops, no refrigeration and no water, but oddly enough, Chris’ claim that the desert is a sterile environment is perfectly true. UHT milk kept very well decanted into a plastic bottle on the lorry, as did a 3kg block of cheddar. Baguettes also kept well in a black bin liner. Chris baked fresh bread for us a couple of times which was lovely (both the act and the bread), and one evening our guides went off into the desert and came back with warm camel milk – though, sadly, the taste fell somewhat short of my romantic expectations. 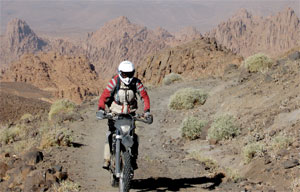 I found the trick on this trip (as any other) was to relax and try to ride with maximum technique and minimum effort. You can’t ride flat out for three weeks without becoming exhausted. The remoteness of the region and lack of possibility of any medical intervention in the event of accident means extra care is needed at all times.  The riding requires constant vigilance, constantly re-checking the foreground looking for ridges, boulders and ditches, and looking well ahead for larger obstructions like oueds or dunes which may need to be skirted, and in which the unwary can be separated from the group. The weird optical effects of the desert also mean it’s difficult to judge distances.

The bikes mostly travelled independently of the truck, so were able to travel off piste, which provided some great technical riding over a huge variety of terrain. There are fast, exhilarating sand plains, sometimes with unexpected flood channels and ditches which are very difficult to see. There are island outcrops of basalt and exfoliated granite in golden white sand seas, and beautiful sandstone formations and arches reminiscent of the Utah Arches national park. (Mike couldn’t resist exploring one). In between the larger outcrops and formations there are valleys of soft sandy ruts. Often there are enormous boulder fields or lava fields where the outcrops have broken down over thousands of years and become spread out in a carpet over the desert floor. The black lava fields are sometimes marked by white, narrow, twisty camel trails, formed over centuries by each passing camel shuffling its feet in the footsteps of the preceding camel to form a path through the shattered, pointy rocks.
Dune fields are the most fun, it’s incredibly exhilarating playing in the dunes, but they can be dangerous. In the really big ones, it’s easy to get disoriented with no sense of which way is up or down, just white sand in all directions, and on all dunes the crests can hide unexpected vertical drops, so it pays to stop or ride along the crest first to check the descent before going over the top.

Oueds were the particular feature of the desert that provided most entertainment for our group. Oueds are dried out river beds, containing channels, ledges and deep ditches, and boulders which have been washed down from the mountains many miles away. In between the boulders, acacia bushes have sprung up and become covered with sand, forming close-spaced soft sandy clumps and humps. These features all combine to form an interesting enduro course, where picking a line is sometimes impossible and it’s often easier just to ride straight over everything except the very deepest troughs and channels. The oueds became a familiar experience on the trip, and became known as the ‘boondocks’. Crossing the wider boondocks caused the group to scatter in all directions in a mad scramble, to emerge erratically on the other side with wild grins.

Parallel and close spaced fields of transverse sand ridges (giant sharp-edged ripples) up to five feet high were a particularly dangerous feature of the terrain. They are usually found in the areas between large rocks or dunes, and are difficult or impossible to see, especially with the sun behind or above, when there is no shadow. 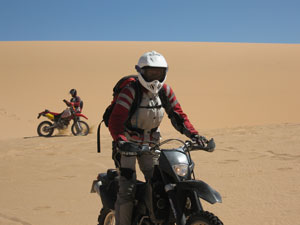 We had one serious crash during the trip when Sean hit a series of the afore-mentioned sand ridges and launched his XR600 30 yards over the top, suffering a broken shoulder, other minor fractures and 2 sprained ankles. There was no possibility of being airlifted out as only the military have helicopters in Algeria, so Sean had to endure an uncomfortable couple of days being driven out of the desert in the Toyota.

Crises do bring out the best in people though. Chris showed great calmness and pragmatism, and also sensitivity, when looking after Sean after his accident. Sean was incredibly strong and stoic. Even when helpless with painful injuries, hanging half off a makeshift orthopaedic board/sand ladder in the middle of the night in the desert, he was reluctant to wake anyone up to help, and suffered in silence. The guides were also really kind looking after Sean during the following days, and even gave up their sleeping blankets.

Conclusion
I was originally slightly wary of going to Algeria in the current political climate, and, being female, I was concerned about how I would be treated. However the reality of the trip was far removed from my fears, and full of lovely surprises, including the fantastic riding, the genuine warmth and generosity of the local people who made tea for us in the desert and invited us into their homes, and the staggering beauty and purity of the landscape. Oh, and finding hedgehogs in the sand dunes was a bit of a surprise too. 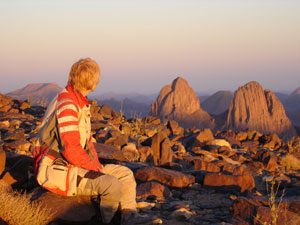 I would do this trip again in a heartbeat. For me there were moments of sheer joy and exhilaration, and also a sense of personal achievement. I am really grateful to the people who made this trip possible and enjoyable. Chris’ openness and willingness to share his world with us for a short while, Jon’s capable care, and the Algerian guides’ concern, generosity and humour, and of course, my fellow riders for their company and willingness to chip in and look out for each other in true TRF fashion made the whole thing a brilliant experience I will never forget.

Of all the many bike trips I have been on, this was definitely the ultimate off road bike trip.