An informed but personal interpretation of travel access across the Sahara,
believed to be correct at the date of updating.
For Saharan travel in a specific country click ‘Country Info’ above or visit the forum.

Cross the Sahara via Morocco and the Atlantic Route to Mauritania for Senegal or west Mali (but see below).
Or Egypt to Sudan along the Nile Route, getting to Egypt via Israel and/or Jordan. Or even a Saudi to Sudan Red Sea ferry. Or try the new Old Colonial Route via Tindouf.

Click links above for official government travel advice, but note some maps and advice exaggerate limitations and risks. For example, the French MAE map (left) correctly suggests access between Moroccan Western Sahara and Mauritania. At the time of this update, the British FCO version still does not. Then again, the latest version of the French MAE map below exaggerates the lack of access in Algeria, while the current British FCO map could not be more different. Politics influence these advisories.

For centuries crossing the Sahara was limited to a handful of routes linking the Mediterranean with sub-Saharan Africa. In the old days, these caravan routes (below) followed a string of reliable wells, while circumventing difficult terrain like mountain ranges or sand seas. 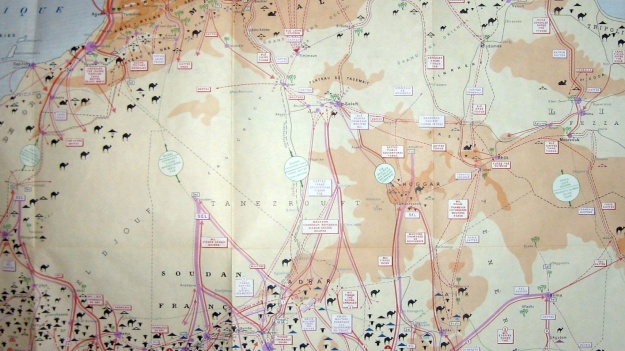 Prevailing routes also shifted according to political alliances and the activities of nomads who’d offer to guide a caravan across the desert for a fee, pillage it, or engage in a bit of both. It’s not an exaggeration to say the situation today is broadly similar but with the added complications imposed by current insurgencies and lawlessness. The Sahara remains by and large, a huge unpoliced region where the risks to the traveller are not to be underestimated. Following the tourist-kidnapping era, foreign overland travellers and tourists are now rare outside of Morocco.
No longer can you roam around the desert with impunity or lately, without an official escort or guide. As with Antarctica, it’s an irony that legitimate recreational access to such a vast wilderness is limited by human intervention or restrictions. 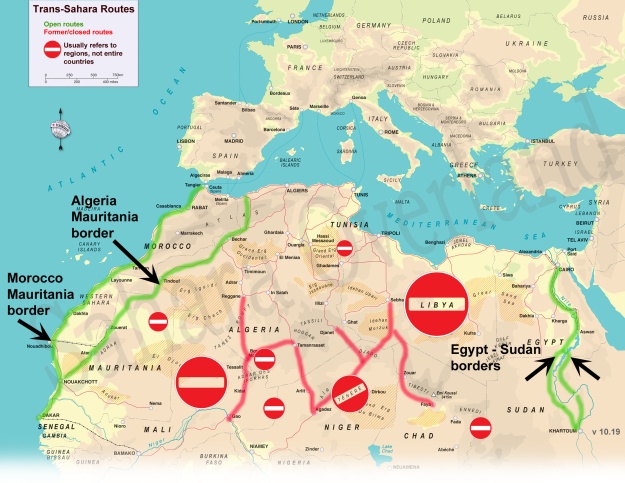 The map above shows the current Atlantic Route, Old Colonial Route and two Nile Routes in green. Former routes are in red, some not used for decades. Right now there are four definite desert border crossings on the current routes:

These border crossings are the only way motor tourists can cross the Sahara.

In the 1970s, crossing the Nubian desert from Egypt right through Sudan to Uganda was the main route to East Africa until the Sudanese civil war put an end to that. A war now rumbles along in South Sudan which separated from Sudan in 2011. 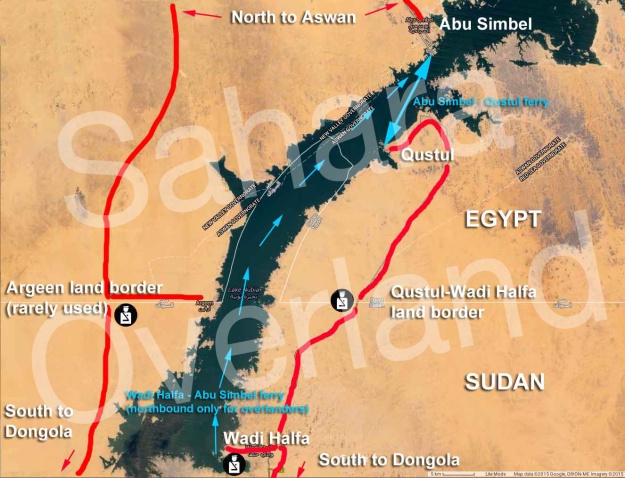 In 2014 a land border finally opened between Egypt and Sudan, though it still requires a short ferry crossing between Abu Simbel and Qustul port (see map above) on the lake’s east shore. Reports from 2018 mention the ferry still runs the full length of Lake Nasser from Wadi Halfa to Aswan but maybe only for passengers and trucks
Private cars and buses using Argeen or Qustul. In 2017 Argeen was used without the former extortionate fees and so as predicted, this is finally the all-land crossing between Sudan and Egypt. Report and costs here (got to latest post).
With the current situation in Syria, Egypt is no longer accessible via Turkey, nor via a transit of Libya from Tunisia. The current solution is a ferry to Israel then Jordan and ferry to Nuweiba, Sinai (Egypt). The ability to do so comes and goes: more here (go to latest post). 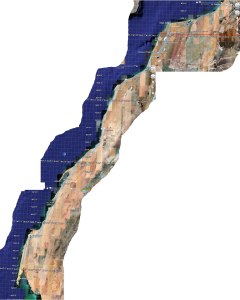 When Algeria initially closed to tourism in the 1990s, the flow of trans-Saharan traffic, both commercial and touristic, shifted west via Morocco and Western Sahara to Mauritania. This is now a sealed road across the desert, barring a few kilometres of piste through No Man’s Land (technically, Polisario territory which in 2017 Morocco partly sealed).
But unless you slow down in Morocco, or head inland in Mauritania, the Atlantic Route (right) is a relatively boring and unsatisfactory run if you’re looking to experience the real Sahara.
Note that despite what many maps show, ‘Western Sahara‘ is not a country but a name applied to the former colony of Spanish Sahara, part-occupied since the 1970s by Morocco to the west and the Algerian-supported SADR (‘Polisario’) inland. Between the two Morocco built a 1500-km long defensive Berm or sand wall.

A few years ago there was a spate of kidnappings in Mauritania. All were released and the road from Nouadhibou to Nouakchott is now well patrolled with checkpoints and is as safe as can be expected. But further south the Route d’Espoir running east from Nema may be less safe. In 2016 tensions briefly rose between Morocco and Mauritania, though tourists were not be affected. 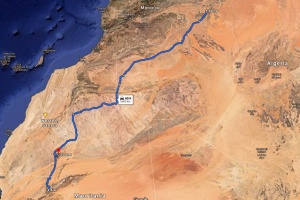 In late 2018 there was talk of a new trade route opening up between western Algeria and northern Mauritania to capitalise on the new road planned to eventually link the two countries.
During the French colonial era (hence my name: ‘OCR’) this was the main route linking Algeria with St Louis

or Dakar, without leaving French West African territory. It closed in 1963 by which time Algeria was independent. Back then, the Atlantic Route was Spanish-controlled territory (see map right). This 1965 book dramatically covered the inland transit in 1959. 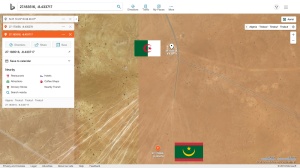 In early 2019 it was said a motorhome transited this new route from Oran via Tindouf and Bir Mogrein to Nouadhibou, including nearly 1000km of piste. And in October 2019 a friend succeeded in crossing southbound along with other intrepid European overlanders. You pick up a military escort at Abadla just west of Bechar, from where it’s 800km to Tindouf (fuel stations on the way). You might spend the night here then check out southwest of Tindouf (map above) and into RIM. More details on the Mauritania page. 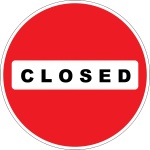 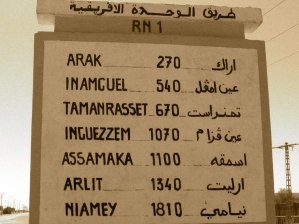 The  TSH is now sealed from Algiers all the way to the Niger border at In Guezzam. From there it’s 150km of mostly firm sandy piste to Arlit on the south side, where the tarmac resumes.
But no tourist has crossed this way since before the Libyan revolution of 2011 and required escorts in Algeria when it was last done, plus a military escort (convoys) in the northeast of Niger. It’s now said that army escorted commercial convoys leave Tam for Agadez every 15 days, swapping at In Guezzam or Assamaka for a Niger army escort to Arlit and Agadez. I’ve not heard of any tourists being able to join this convoy. 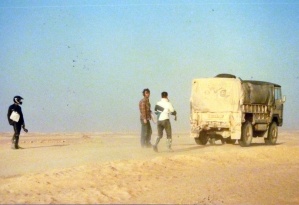 Tanezrouft Route: Algeria – Mali
Although it was never that popular, following the 1990s the Algerian stage of the Tanezrouft Route south of Reggane (and west of the TSH, left) got closed to tourists, and even trying to get to Bordj Moktar from Tam became risky or forbidden. The north Malian portion of the Tanezrouft route is now a war zone, and for years north Mali has been where most hostages ended up in the hands of AQIM or similar groups. Now French and other forces are engaged in regaining that territory.

There are other trans-Saharan routes that you might think possible, but for tourists these routes are marginal, dangerous or closed.

For recent information visit the Sahara Forum or follow the links at the top of this page.